HEART OF STONE is live!

Release Day is here for the 4th Gods & Monsters novel! This one was a true labor of love in every sense of the word, and I hope you enjoy revisiting Ari and the gang as much as I did. 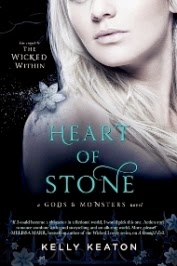 A CHILD FATED TO START A WAR.
A LOVE SHE’LL RISK EVERYTHING TO PROTECT.

Set in New 2, a dangerous and lush alternate New Orleans, the fourth book in Keaton’s Gods & Monsters series, finds the God-killer Ari and Mistborn Sebastian on the hunt for Archer, infant son of Athena, a child fated to bring about the Blood Wars, the ultimate showdown between the gods and the monsters they created, a war that will trap mankind in the middle of a destructive conflict thousands of years in the making.

As Ari and Sebastian attempt to rescue the child, forces pull them apart, sending Sebastian on a perilous journey to the desert sands of Egypt and into the lair of a dark, enthralling entity, and Ari to the Halls of Olympus and, darker still, the very heart of the Underworld where Death awaits with a bargain that brings Ari’s worst nightmares into sharp and heart wrenching focus.